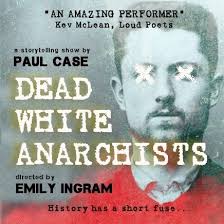 Paris, 1892. If you’re not rich, things looks bleak. Exploitation, starvation and disease are daily realities for many. Police crackdowns and political bombings tear the city apart. Out of this chaos emerges Emile Henry, a young anarchist preparing for his war against the State. But when he hears strange rumblings from the future, madness beckons…

Paul Case’s Dead White Anarchists is a Molotov cocktail of storytelling, theatre, radical history lesson, sci crime thriller and revolutionary psychedelic death trip. It is a reflection on a bloody past and a chaotic present, but always holding hope for tomorrow.

Written and performed by Paul Case
Directed by Emily Ingram

Emily Ingram is an emerging director and writer, specialising in primarily in prop work and productions that tread the line between theatre and storytelling. She is a member of Birds Of Paradise’s Young Artists scheme and the creator of Some Kind of Theatre’s Theatre On The Sofa project, a scheme which brings theatre to non-traditional venues. Recent credits include the widely praised The Grandmothers Grimm (Buxton Festival Fringe, Southwark Playhouse, Edinburgh Festival Fringe) and The Sprite In The Dolls House (Assembly Roxy, The Palace of Holyroodhouse)

[Paul] is at times drily humourous, then again petulent or dramatic. The audience are rapt, enlisted for the cause” – allthesenewrelations.com

“You wouldn’t believe the passion. Put a big smile on my face and that’s no mean feat. Blinding!” – Steve Ignorant, CRASS/Slice of Life

“One of the best of a new generation” – Attila The Stockbroker