“Red Metropolis: Socialism and The Government of London” with Owen Hatherley and Hilary Wainwright [online event] 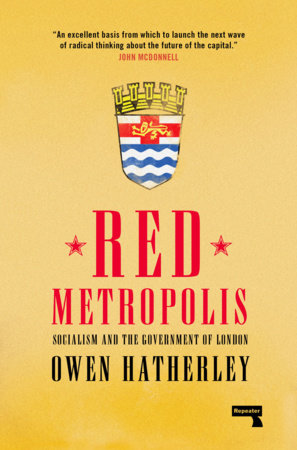 A polemical history of municipal socialism in London and an argument for turning this capitalist capital red again.

London is conventionally seen as merely a combination of the financial centre in the City and the centre of governmental power in Westminster, a uniquely capitalist capital city. This book is about the third London a – social democratic twentieth-century metropolis, a pioneer in council housing, public enterprise, socialist design, radical local democracy and multiculturalism.

This book charts the development of this municipal power base under leaders from Herbert Morrison to Ken Livingstone, and its destruction in 1986, leaving a gap which has been only very inadequately filled by the Greater London Authority under Livingstone, Boris Johnson and Sadiq Khan.

Opposing currently fashionable drivel about an imaginary ”metropolitan elite”, this book makes a case for London pride on the left, and makes an argument for using that pride as a weapon against a government of suburban landlords that ruthlessly exploits Londoners.

**Please note this is an online event. You will be emailed an invitation link on the morning of the event. Please check your spam folder and email us if you have not received the invitation link by the afternoon**

“No one else writes so clearly yet with such elegiac intensity about the symbiosis that exists between history and the built environment, or the lives that are caught, mangled and realised in its midst.” – Lynsey Hanley, author of Estates: An Intimate History

“Hatherley is a hugely knowledgeable and passionate advocate for architecture and planning, a cracking writer, and an undervalued figure of the left. For anyone daring to tackle social issues, Red Metropolis should be compulsory reading.” — Emma Dent Coad, Labour councillor for Golborne Ward and MP for Kensington, 2017-2019

“This book captures, like no other, the way London local government has been a tumultuous political battle ground and the breeding ground of radical political ideas and social movements. It stands as an excellent basis from which to launch the next wave of radical thinking about the future of the capital.” — John McDonnell, Deputy Leader and Chair of Finance of the Greater London Council, 1981-85, and Shadow Chancellor, 2015-2020

Owen Hatherley writes regularly on aesthetics and politics for the Architectural Review, The Calvert Journal, Dezeen, the Guardian, Jacobin and the London Review of Books. He is the author of several books, most recently Landscapes of Communism, The Ministry of Nostalgia and The Chaplin Machine.

Hilary Wainwright is editor of Red Pepper and Fellow of the Transnational Institute. Her most recent book is A New Politics From the Left (Polity 2018. Hilary was Coordinator of the GLC’s Popular Planning unit from 1982 until its abolition in 1986.