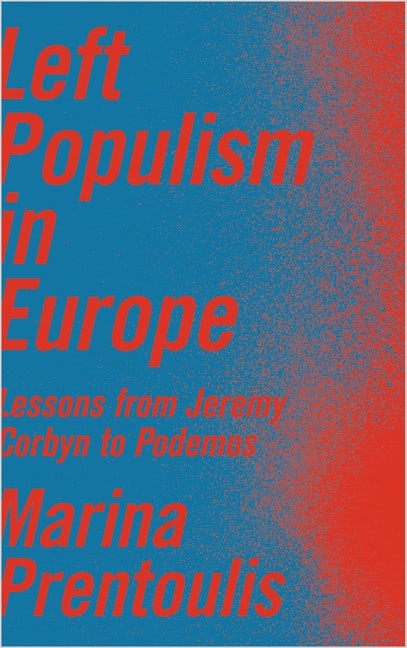 What we can do to harness the power of broad-based, popular left politics?

We are really pleased to welcome Marina Prentoulis to virtual Housmans to discuss her new book with Pluto Press, Left Populism in Europe: Lessons From Jeremy Corbyn to Podemos. Marina will be in conversation with Kate Hudson, the General Secretary of the Campaign for Nuclear Disarmament.

Syriza in Greece and Jeremy Corbyn’s Labour Party in Britain have both failed to introduce socialism in their countries, while Podemos has had better fortune in Spain and is now in government with the Spanish Socialist Workers’ Party.

In this online event, Marina and Kate will explore left populism across grassroots, national and European levels. They will consider how each party operates, the roots of each movement’s base, the forms of party organisation, and the particular national contexts.

Recommended for anyone wanting to understand and move forward positively in a bleak time for the left in Europe.

Marina Prentoulis is Associate Professor in Politics and Media at the University of East Anglia. She has been the UK spokesperson of Syriza and has given numerous interviews on British and International media including BBC’s Newsnight and the Andrew Marr Show as well as CNN and Sky News.

Kate Hudson is active in the European Left Party, particularly its working groups on Peace and on Fighting the Far Right. Formerly an academic working in this field she has written extensively on this issue, including European Communism since 1989 (Macmillan, 200) and The New European Left (Palgrave Macmillan, 2012). She is also General Secretary of the Campaign for Nuclear Disarmament.

There are three available tickets for this event: if you’d like a copy of the book then choose the book plus entry ticket. If you’d like to support Housmans then please consider buying a solidarity ticket at £3. There’s also a free access ticket for students and unwaged comrades.