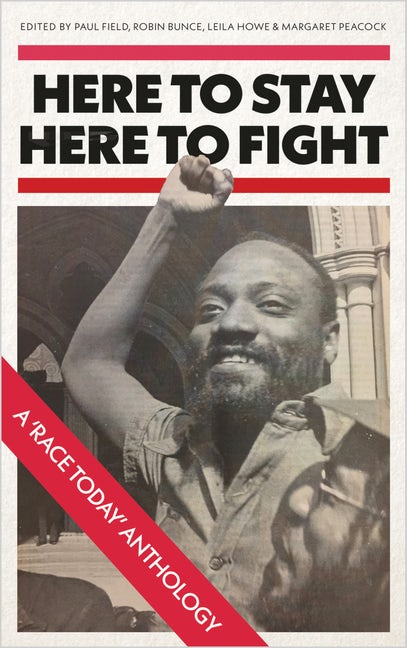 From 1973 to 1988, Race Today, the journal of the revolutionary Race Today Collective was at the epicentre of the struggle for racial justice in Britain. Placing race, sex and social class at the core of its analysis, it featured in its articles and pamphlets contributions from some of the leading writers and activists of the time: C. L. R. James, Darcus Howe, Linton Kwesi Johnson, Toni Morrison, Maya Angelou, Walter Rodney, Bobby Sands, Farrukh Dhondy and Mala Sen and many more.

Here to Stay, Here to Fight, draws together many of these key articles and extracts into an impressive collection – the first book-length anthology of its kind – rescuing many contributions from the obscurity of inaccessible archives.

Editors and contributors to the book will be at Housmans to exploring the legacy of Race Today in contemporary social movements and debates around race, gender and class, and to answer your questions.

Leila Hassan was employed by Institute of Race Relations from 1970 when it was still under the control of Chatham House. A member of the UK’s oldest black power organisation, Black Unity and Freedom Party, at that time, Hassan was one of the staff members who helped overthrow the Institute’s conservative management. Hassan went on to become a member of Race Today Collective, the deputy editor of Race Today from 1973 and editor from 1985.

Farrukh Dhondy is an Indian-born award-winning writer, playwright, poet, screenwriter and political activist. He was appointed to Central Core of British Black Panther Movement in 1970 and was a founder of Race Today Collective in 1973.  Dhondy worked as a teacher in East End of London before forging a career as a novelist and screenwriter. From 1984 until 1997 he was a Commissioning Editor at Channel Four.

Adam Elliott Cooper is a London-based academic and activist. His research focuses on postcolonialism, state power and resistance movements. He sits on the board of The Monitoring Group.