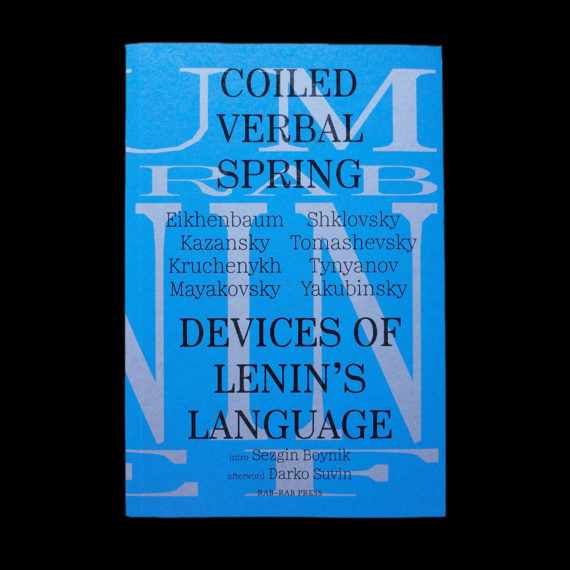 This event has been called by AMM All-Stars to launch, draw attention to, celebrate, perform, discuss, worship, use, abuse, fondle, publicise – what you will – Coiled Verbal Spring/Devices of Lenin’s Language, a book edited by Sezgin Boynik and published by Rab-Rab Press in Helsinki.

The core of this shiny blue slab (21cm x 13cm x 2.3cm; 530g; 468pp) is the entire contents of the LEF (Left Front of the Arts) Journal (no. 5), published just after Lenin’s death in January 1924: texts by Mayakovsky, Shklovsky and other Zaum Formalists which have never appeared in English before. They begin with a newspaper advert for marble busts of Lenin, and say – directly, clearly and unequivocally – WE OPPOSE THIS. Aware that the epigones are threatening the revolution, the writing is fierce, analytical, funny and cutting. It proves that Great Literature and Revolution cannot be separated, and whoever separates them is a Stalinist, and a liar to boot. Far from being the “dilettantes” denounced by the Perpetrators of Leftwing Boredom, AMM All-Stars and Psychedelic Bolsheviks are prescient in their refusal to separate art and revolution, subject and object, chicken and egg. We are funky time-travellers who refuse to be crucified on the cross of calendar time. We existed in 1924 and we exist in 2019. Sezgin’s publication proves this. If Debord had known these texts, he wouldn’t have allowed the French Communist Party to dictate his reading of Lenin, and Situationist politics would have avoided the swamps of anarchism and the crap pictures of Ralph Rumney.

Sezgin’s 135-page introduction, “Out of Synch with the Thing” is a book in itself, using the vogue terms “contemporaneity” and “conjuncture” to expound the class nature of Lenin’s politics. His bootnotes smash the pretensions of the bourgeois academy to understand Shklovsky and the Formalists (the one for Marjorie Perloff deserves a bottle of vodka). Craig Brandist, arise! Also included is a pamphlet by Alexei Kruchenykh from 1928, and there’s an afterword by Darko Suvin (like Sezgin, although from a previous generation, Suvin is a product of Tito’s Yugoslavia, where Cold War cliches held less sway) pointing out that we live in a war economy and that to stop war you need class politics. For fuck’s sake, can’t people stop gassing on about Brexit and talk about something important for a change? Thomas Campbell’s translations are fab. This book is a conceptual explosion. It even smells of paraffin. You want to lick the cover!

AMM All-Stars are a musical unit, a survival boatload from the goode shyppe Association of Musical Marxists, a groupuscule founded by Ben Watson and Andy Wilson, which between 2010 and 2015 ruffled the smooth surface of London life by daring to suggest that without pertinent art Revolutionary Politics are void, and that without politics Avant is a disposable charade for hipsters, snobs and posers. At the time of going to press, the worthy constituents were Peter Baxter on punk drums; Dave Black on Northumbrian blues guitar; Paul Shearsmith (our Rico) on situational trumpet; Helen Tate on east-european violin; Graham Davis on krautrock synth & like absurdities; Out To Lunch on google-gargle; Jair-Rohm Parker Wells on bass; Esther Leslie on text – but there are other strange entities in orbit (Luke Davis, Kit Mackintosh, Rob Goldsmith …) who may be persuaded to come down. Tune in to hear AMM All-Stars on Resonance 104.4FM between 2pm and 3pm on Wednesdays, by all means, but don’t expect us to sound like that again. Oh yes, if you need any Unkant books we’ll probably have a selection.