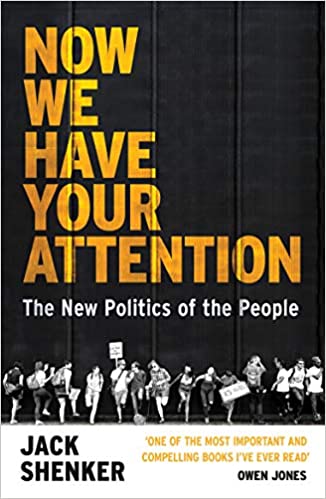 Blog post from Jack Shenker: ‘Now We Have Your Attention’: Pandemics, Protest, and the New Politics of the People

I first met Fatima Djalo in a SOAS University basement more than two years ago. It was a cramped, out-of-the-way space decked with strip lighting overhead and institutional carpets underfoot; exactly the kind of urban meeting room hinterland where those with radical plans often end up gathering to thrash out dreams of something new.

Fatima, a small woman in her early fifties who was born in the west African state of Guinea-Bissau, had no experience of public speaking and looked nervous as she surveyed the faces around her. But she got to her feet anyway, and told us about her job as an outsourced cleaner in the Ministry of Justice, at the very heart of the British government; about the atrocious pay and conditions, the long shifts and back-breaking labour, the contempt shown by bosses towards her. “They want people like us to hide away and make do with it,” she explained. “But we are not the dirt we clean.”

Over the course of the next year I followed Fatima and the independent trade union she had joined, United Voices of the World, as they grew their movement, faced down employers, and launched an unprecedented wave of protests and strike action that delivered victories to precarious cleaners, caterers and security guards working everywhere from multinational banks to the officesof the Daily Mail. My aim was to try and make sense of this country’s many overlapping crises by exploring the forces which are reshaping our political landscape, and the new forms of struggle emerging from them – and I knew that in order to do that, it wasn’t Westminster where I needed to be, and nor was it politicians’ voices that I needed to hear.

‘Now We Have Your Attention: The New Politics of the People’is the book that arose from that journey – one that travels not to the great citadels of power, but to the margins instead: places that lie off the edge of the page, shady corners into which news cameras rarely reach. It argues that it is the people dwelling in these places who can best explain why the present feels so unstable. It believes that if we want to find the future – or at least understand the battles that will forge it – then we must look here.

The book was first published back in 2019, when many on the left still believed that a Labour government was tantalisingly close to power, and none of us had ever heard of Covid-19. Since then, institutional politics in the UK has mutated yet again, and a global pandemic has produced ruptures for which there are no precedents in living memory. But the communities who are the focal point of ‘Now We Have Your Attention’ – people united by different forms of exclusion and vulnerability, yet who have taken advantage of new political possibilities to come together and fight, on their own terms, for alternatives – are now, as a result of these latest developments, more fiercely relevant than ever.

With the Conservatives enjoying a healthy parliamentary majority, catalysts for change are today increasingly likely to emerge not from opposition benches, but the streets. Coronavirus has unleashed a new social catastrophe that is nested inside a great many existing social ones, like a Russian doll, and tackling it has exposed all of them to the light. The disease’s transmission lines have often proved to be the cracks identified in ‘Now We Have Your Attention’ – poverty, precariousness, the insecurity of not having a dependable roof over one’s head – and our shared responses to it have drawn on the very forms of self-organised politics examined in its chapters. Little wonder that polling suggests only 9% of people in Britain desire a ‘complete return to normal’ after Covid-19.  This pandemic has forced all of us to contemplate the questions articulated by the characters in the book’s pages: questions regarding the extent to which we think of ourselves as part of a collective, questions about what it truly means to be safe, or free.

From renters’ movements resisting evictions to migrant collectives helping to lead the national reckoning with structural racism and mutual aid groups bubbling up organically throughout the country, our spring and summer have been convulsed by grassroots politics – just as the venal self-interest of our formal political leaders was thrown into stark relief. The paperback edition of ‘Now We Have Your Attention’, which includes a new prologue examining the impact of coronavirus on our politics, is out now, and I’m hugely grateful for the support of Housmans and the Alliance of Radical Booksellers in spreading the word.

If there is one thing that I hope readers of the book take away, it’s the notion that after a long period in which we were told, wrongly, that ideology was dead and politics was resolved, the years to come will in fact be marked by agitation and opportunity – and that we are all political agents, with a crucial part to play in determining where we go from here. Far too often, mainstream political journalismpresents politics to us as an elite sporting event: a spectacle played out by a select few over there, something for the rest of us to watch passively from our sofas, and boo, or cheer. It is on the shelves of independent bookshops that we can best read about politics in its wider, deeper form: a living thing that runs through all of us and alters ordinary people, and which ordinary people in turn are capable of altering for themselves in ways that go far beyond a trip to the polling station once every few years.

As for Fatima, she has spent the past few months on the front-line once again – walking out of the Ministry of Justice along with her cleaning colleagues in protest at the refusal of her employer to provide occupational sick pay to workers who fall ill with suspected coronavirus, and the subsequent deaths of two outsourced members of staff who fell sick with symptoms consistent with Covid-19. After an epic campaign, the government department was forced to change its policy and United Voices of the World has now won formal union recognitionthere; since the pandemic began, the union has attracted well over a thousand new members across a vast swathe of different industries – people who know that this is a political moment that demands action, not despondency, and who have found reasons for hope amid the darkness. “We beat their union busting and won our rights,” says Fatima.“I’m delirious with happiness with this result. Now let’s go for full victory.”