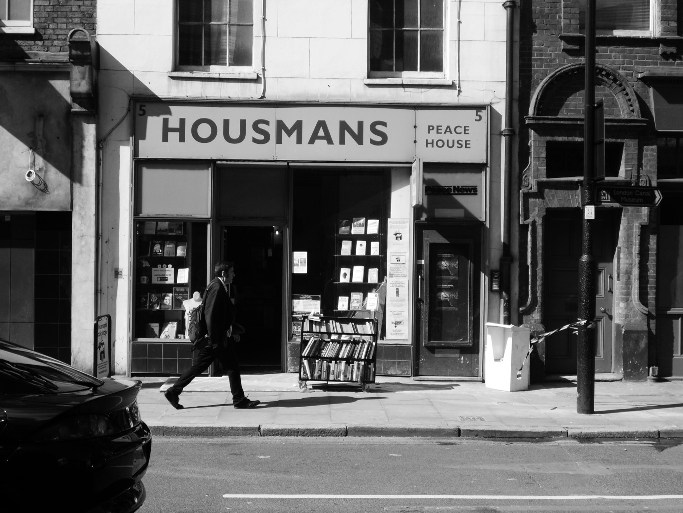 The Story of Housmans

Housmans Bookshop originally opened on 26 October 1945. Its roots, however, go back to the great upsurge of the British pacifist movement in the 1930s, marked particularly by the founding of the Peace Pledge Union (PPU) by Dick Sheppard in 1934.

The PPU had a temporary bookshop as early as the summer of 1936, at 36 Ludgate Hill, London, where people sat on the floor to listen to lunch-time talks by Dick Sheppard and others. This was followed in 1943 by designating as the PPU Bookshop a room in the PPU’s then headquarters (Dick Sheppard House, 6 Endsleigh Street, Bloomsbury) – although most of the custom was by mail order, because the building lacked a shop window and passing trade.

In the aftermath of the Second World War the writer and playwright Laurence Housman, a Sponsor of the PPU, suggested that it should establish a permanent bookshop to promote ideas of peace, and also the ideas of human rights and a more equitable economy by which future wars, and all their inherent suffering, might be avoided. One of the prime movers in this initiative was John Barclay, who had long been on the staff of PPU, and then latterly of Peace News (itself a PPU project from soon after its launch in 1936, though administered as a separate company). Trefor Davies of PPU staff, and Harry Mister of Peace News staff, were also involved. A company limited by guarantee was formed, whose directors included the pacifist author Vera Brittain, the critic Hugh I’Anson Fausset, and Llewelyn Kiek, a London bookseller.A bomb-damaged, but repaired, shop was leased cheaply for three years from Westminster City Council at 124 Shaftesbury Avenue, close by the well-established bookshop area of Charing Cross Road. The shop was named in honour of the originator of its concept, Laurence Housman, who celebrated his 80th birthday shortly before he performed the opening ceremony on 26 October 1945. The anarchist author Herbert Read and Kingsley Martin, redoubtable editor of the New Statesman, were present to support the new venture, together with the first manager, Geoffrey Gilbert, and his assistants, Eileen Agar, Henry Rutland and Duncan Christie, and many PPU members.

Housmans remained viable for the three years, but Westminster’s terms for renewal of the lease at the end of 1948 were so much more expensive, as were the costs of alternative premises, that the PPU decided to close the physical shop. Its goodwill, however, was passed to the Peace News company, who registered Housmans Bookshop as an additional trading name.

Over the next ten years Peace News continued to build up the mail-order bookselling business from its own premises at 3 Blackstock Road, Finsbury Park, and ran bookstalls at major peace events – this activity being under the joint management of Dora Dawtry and Harry Mister. The Housmans “brand” was also made more prominent in 1954 with the publication for that year of the first edition of the Housmans Peace Diary.

In 1958, thanks to the enthusiasm and generosity of Tom Willis and other Peace News supporters, it became possible to acquire a freehold building at 5 Caledonian Road, Kings Cross. After renovation of the then almost 100-year-old premises, Peace News moved into the upper floors during the summer of 1959, and Housmans resumed as a fully fledged bookshop. Dora Dawtry publicly declared the shop open, in the presence of Vera Brittain, at a ceremony on 20 November, to coincide with the Peace News Christmas Bazaar held nearby.

A definite fillip to the Housmans business was the emergence of the vibrant nuclear disarmament movement of the late 1950s and early 1960s, with CND and Committee of 100 material, and a proliferation of other pamphlets and literature, in stock. The shop also served the local community as a general bookshop, greeting cards stockist and stationery retailer. Endsleigh Cards (named after the street in which the PPU offices stood), another trading brand of Peace News, were regularly stocked, especially useful for sending to imprisoned COs all over the world on Prisoners for Peace Day, 1 December each year.

In 1961 there was a mutual agreement to separate Peace News from the PPU, and Housmans remained associated with Peace News. Nevertheless, there has always been an overlap between the supporters of PN/Housmans and those of the PPU. The Peace News company was restructured in 1972 as Peace News Trustees Ltd, with two subsidiary companies, Peace News Ltd for the paper, and Housmans Bookshop Ltd for the shop.

At various times in its history, the shop has published much other material, besides the annual Peace Diary. Most of these items have been pamphlets on peace and related issues, sometimes published jointly with, or on behalf of, other bodies such as Peace News.

Whilst the shop has welcomed visitors from all over the world as an established resource for the international peace movement, it has also faced direct physical and legal attack. In 1974 an IRA bomb blew up the pillar box directly outside the shop (which was there because the building once housed the local Kings Cross Post Office, from the late 19th Century until some time in the 1930s). The explosion in the pillar box destroyed the first issue of the Campaign Against Arms Trade’s newsletter which had just been posted in it, and damaged some of the building’s windows, but caused no personal injury. Four years later, a letter bomb – one of a series sent to radical and left-wing addresses – caused burns to a staff member’s hands. In the 1990s a group of people brought long-drawn-out libel actions against the shop over anti-fascist literature that was stocked.

For over sixty years, through successive waves of the peace movement, Housmans has continued to promote peace, human rights, and environmental and other radical causes, providing literature and other material over the counter, as well as at stalls and by mail-order. Despite some years of planning blight in its immediate environs, Housmans remains one of the few “alternative” bookshops in Britain, and recently, with the refurbishment of the local area, Housmans itself has had a “facelift” and looks forward to many more years of radical campaigning.