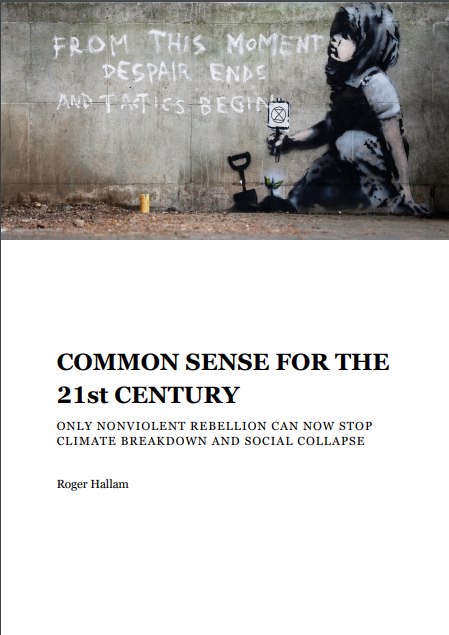 Roger Hallam is co-founder of Extinction Rebellion and has written a booklet called “Common Sense for the 21st Century: Only Nonviolent Rebellion Can Now Stop Climate Breakdown and Social Collapse”, the print copy of which we will be launching at this event.

The booklet outlines how the environmental and climate movements around the world need to come together in order to avert extinction of all life. It goes into detail on using nonviolent civil disobedience as well as other strategies and tactics to make real change happen.

The booklet is available as a free download, and we will also have print copies available

Roger’s position is that mass civil disobedience is the only way to create meaningful change on the issue. He says “I strongly believe in the tactics and strategies found in my booklet which are currently being ignored by many environmental campaign groups. Additionally, I outline the concept of citizens assemblies and a new transition movement to inspire people to get started on making the necessary changes happen now, before governments act. In the conclusion I write, “The cost of freedom is civic duty.” I strongly believe tactics and strategies found in my booklet are currently being ignored by most environmental campaign groups. I invite them all to read my booklet and get in touch. […]

My booklet, Common Sense for the 21st Century, isn’t just a theory, it’s a call to action and details the practicalities which I hope will lead to real change. The political class alone is not going to save us from extinction. Only a new common sense and a genuine rebellion can save us now. I hope you join us!”

The name of the book is inspired by Thomas Paine’s pamphlet Common Sense, credited as being the spark that ignited the American revolution. When Extinction Rebellion made the ‘Declaration of Rebellion’ in October 2018 it inspired thousands of people to break the law and sit down on the bridges in London in November. Since then Extinction Rebellion and Fridays for the Future have grown exponentially, along with the reach of Nobel peace prize nominated Greta Thunberg and David Attenborough‘s strong messages to the world.

As Roger is currently under arrest, XR’s Andrew Medhurst will be speaking and taking questions.