“The Cause of Labour is the Hope of the World”

A Christmas and New Year card designed by Walter Crane 1984, produced by Past Pixels.

Walter Crane was a highly regarded and successful wood engraver and designer, especially known for his colour illustrations of children’s books. He was an active memeber of the Arts and Crafts Movement. He joined William Morris in the Social Democratic Federation and subsequently in the Socialist League but he lent his design skills to the wider movement.

Ten greetings cards, two of each of five different colours, with envelopes.

A Merry Christmas and a Happy New Year

With good luck to Labour, hand, heart and brain

Stick fast to your banner, stand solid, nor veer,

Till the cause of the Workers renews earth 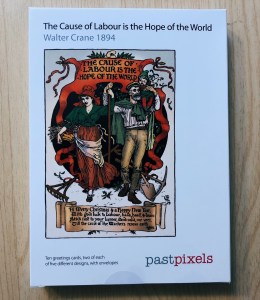